Right below the fairytale Wernigerode Castle, our family-run hotel awaits you for your vacation in the Harz Mountains. The Schlossberg Hotel combines two historically remarkable and listed buildings, the Kammerboten half-timbered house from 1738 and the Villa Frühling from 1874.

Due to the unique and slightly elevated location of the villa on the slope of the Castle Hill, our guests enjoy a magnificent panoramic view over the beautiful old town of Wernigerode, the first ridges and valleys of the Harz up to the Brocken, the highest mountain in the Harz.

The Schlossberg Hotel has a total of 16 double rooms in the three room categories comfort, superior and suites. Ten rooms are located in the Villa Frühling and six rooms in the Kammerboten half-timbered house. All rooms have free WiFi.

From the breakfast terrace and the forest garden, you can overlook the historic city center with its half-timbered idyll, only a few minutes’ walk away, or let your gaze wander into the distance as far as the Brocken. Restaurants & bars, historical sights, cultural events, traditional craftsmanship and impressive nature experiences in the national park: We welcome you to Wernigerode, the colorful city on the Harz! We have put together numerous excursion tips for all generations for you. For an unforgettable and eventful vacation.

Our reception is open until 6 p.m. every day. If you will arrive later than 6 p.m. please write us an email and we will be happy to organize a contactless check-in option.

As a bed & breakfast hotel, we do not have our own restaurant in-house. However, there are numerous restaurants and bars within walking distance of the hotel in the old town of Wernigerode. We have put together a nice selection for you here.

“With your gracious approval, I have recently moved into the house that was built for me. I follow my heart’s sincere wish in the most submissive request: Your Excellencies want to accept my most submissive, deeply felt thanks for the great grace again shown to me with grace … “

April 6th, 1875, letter of thanks from Carl Frühling to Count Otto zu Stolberg-Wernigerode

History of the Villa Frühling

The reason for the major historical reconstruction of Wernigerode Castle, which was carried out from 1862 to 1885 under the direction of the architect Carl Frühling, is the meteoric political rise of Count Otto zu Stolberg-Wernigerode, which made him the first Upper President of the Prussian province of Hanover from 1867, later the German ambassador in Vienna and finally Bismarck’s deputy as Vice Chancellor of the German Empire and Deputy Prime Minister of Prussia. Today around 200,000 visitors climb the Agnes Hill every year to discover the impressive castle ensemble in the style of historicism. 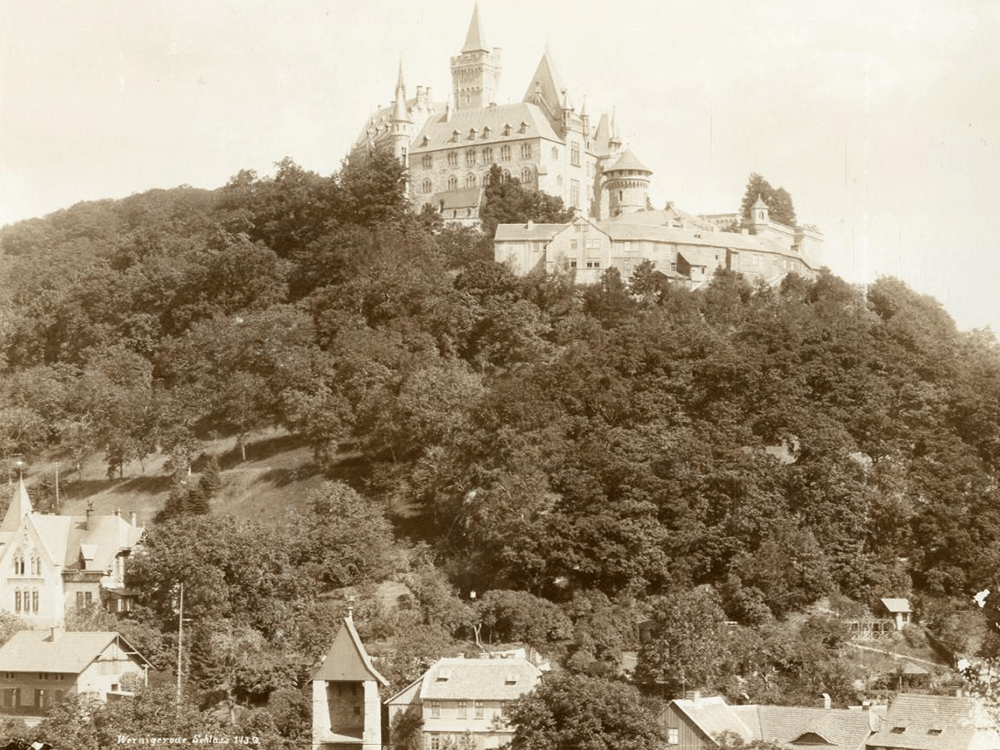 The “Villa Frühling” below the castle, in the lower left corner of the picture, around 1890

One of the main benefits that Carl Frühling received from Count Otto in the course of his work on the castle renovation was the approval to build his own house on the Schlossberg (Castle Hill), which the Count financed and left to his castle builder as an official residence. Carl Frühling moved into the house on April 1, 1875. In fact, shortly thereafter, the Villa Frühling was formally “lent” to him, as is evident from a letter from Count Otto dated April 13th, 1875: “… There will probably be a formal handover of the  the house, as well as the housing subsidy is to be arranged … “. Even after he left the count’s service, Frühling was allowed to continue living in the house. 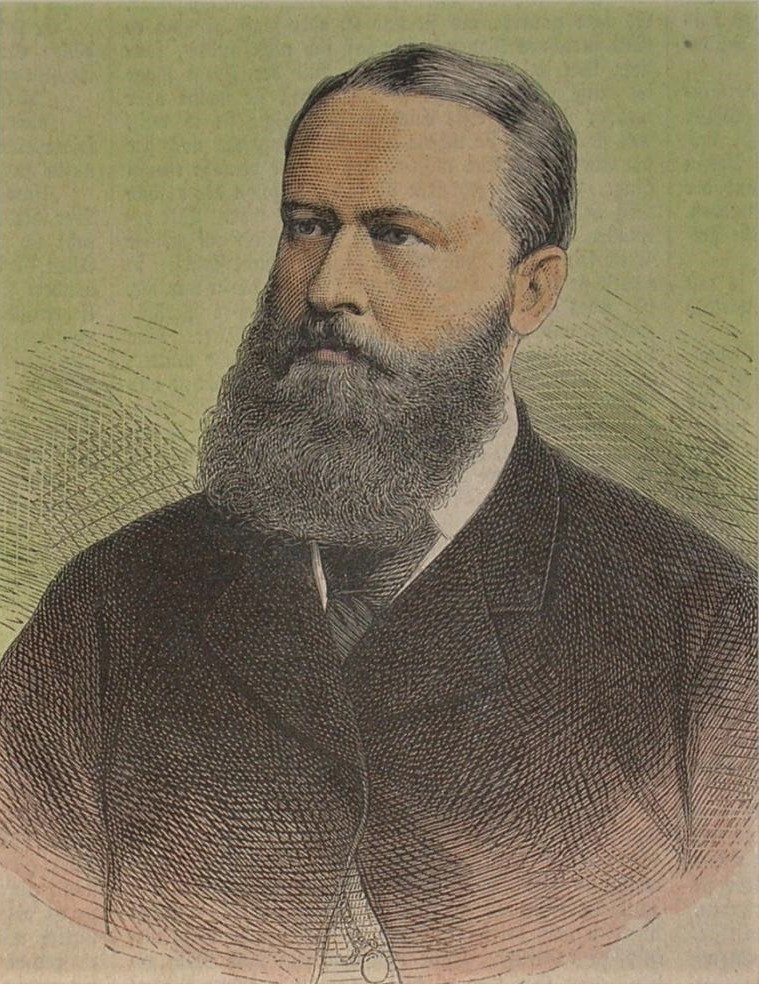 The lord of the castle, Count Otto of Stolberg-Wernigerode, approx. 1876

The type of the building corresponds to the villa buildings of the time around 1875, with a high, solid basement and numerous architectural extras. A striking feature of the main facade is the stone console in the gable, which is still preserved today and on which a statue must originally have stood. Carl Frühling, who was born in nearby Blankenburg in 1839, was not only active in the area as a builder of the castle, he was also employed in many other ways by Count Otto and worked on numerous other buildings that shape the image of Wernigerode and the surrounding villages to this day. 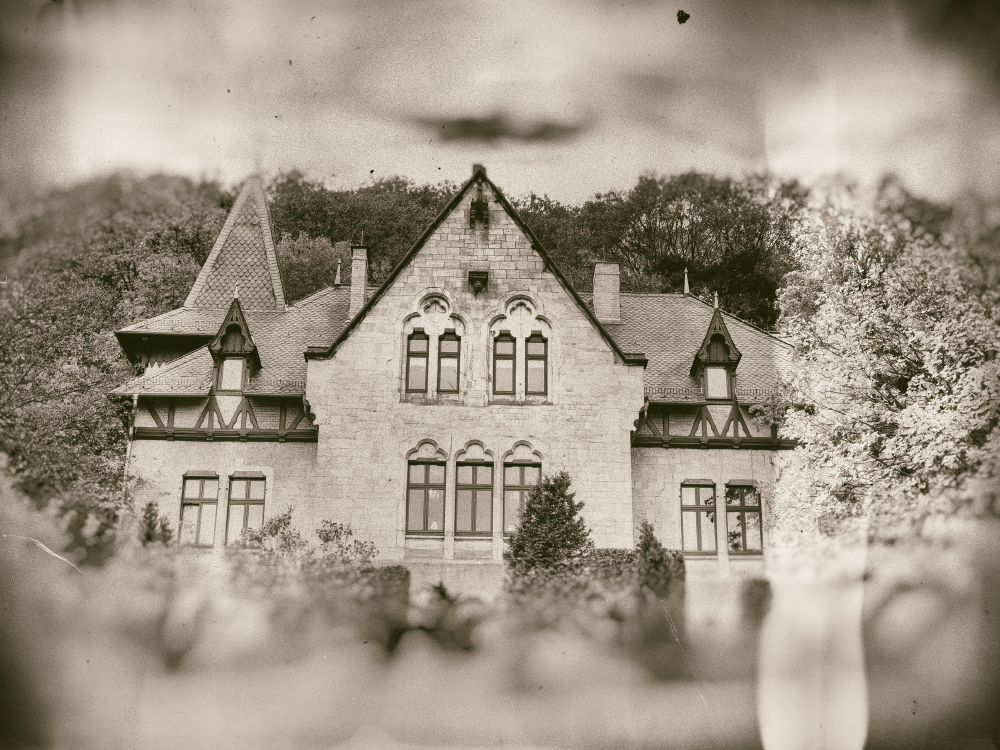 In addition to the count´s horse stables, Frühling also designed the count’s crypt and finally the Prince Otto monument with a large flight of stairs and a wall. From 1860 to 1862 he was the construction manager at Ilsenburg Castle, and from 1861 to 1877 for the renovation and restoration of the Ilsenburg monastery. 1867-1883 he restored the former monastery church in Drübeck. From 1869 to 1871 he worked on the drafts of the Gräflichen Gymnasium, today’s Gerhart-Hauptmann Gymnasium on Westernstrasse in Wernigerode. From 1880 to 1886 he restored the Protestant church of St. Sylvestri in Wernigerode and overlooked the church tower. In 1880 he was appointed Princely Building Council. 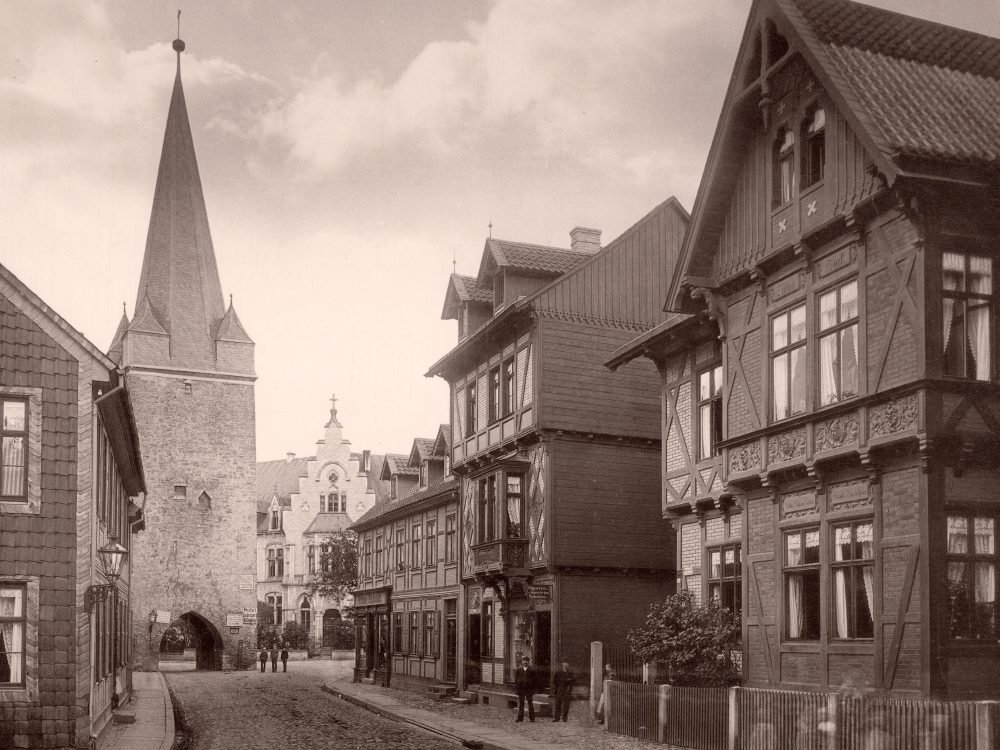 The Princely High School, in the background, to the right of the Western Gate, 1893

Carl Frühling lived in the villa until a few weeks before his death on March 26, 1912 in Braunschweig. Here he had studied architecture at the beginning of his career at the Collegium Carolinum and was finally buried. Except for the portrait on a keystone of an arch in Wernigerode Castle, no portrait of the architect who was so influential in the region, has survived. After the death of Frühling, the villa continued to be used by the princely administration as an official residence for the building and chamber councilor Kielburger and later the chamber director Braulke. After 1912 the Zimmermann family from the island of Föhr leased the villa . From 1938 the villa was used as a vocational school, as the seat of the military district command and, after the Second World War, as a kindergarten until 1997.

In 1998 the manorial villa was redesigned for hotel operation by a private owner, strictly following the rules of the protection of historical monuments. After changing ownership, the Lerche family has been the new owner of the Schlossberg Hotel since April 2021.

History of the house of the valets

Opposite the Villa Frühling there is another historical building, which also has a direct connection to the castle of the counts and princes of Wernigerode-Stolberg. Certainly not every visitor will notice the small sundial on the house when walking past on the way up to the castle. With the noted year 1738, it is an important indicator of the presumed year of construction of the half-timbered house. In any case, the architectural style fits perfectly into this time, in which the orphanage in the immediate vicinity was built, in which the administration of the Harz National Park is now located. The vaulted cellar was probably used as a storage cellar and laundry room with a heatable washing kettle, and there was a smokehouse on the roof. 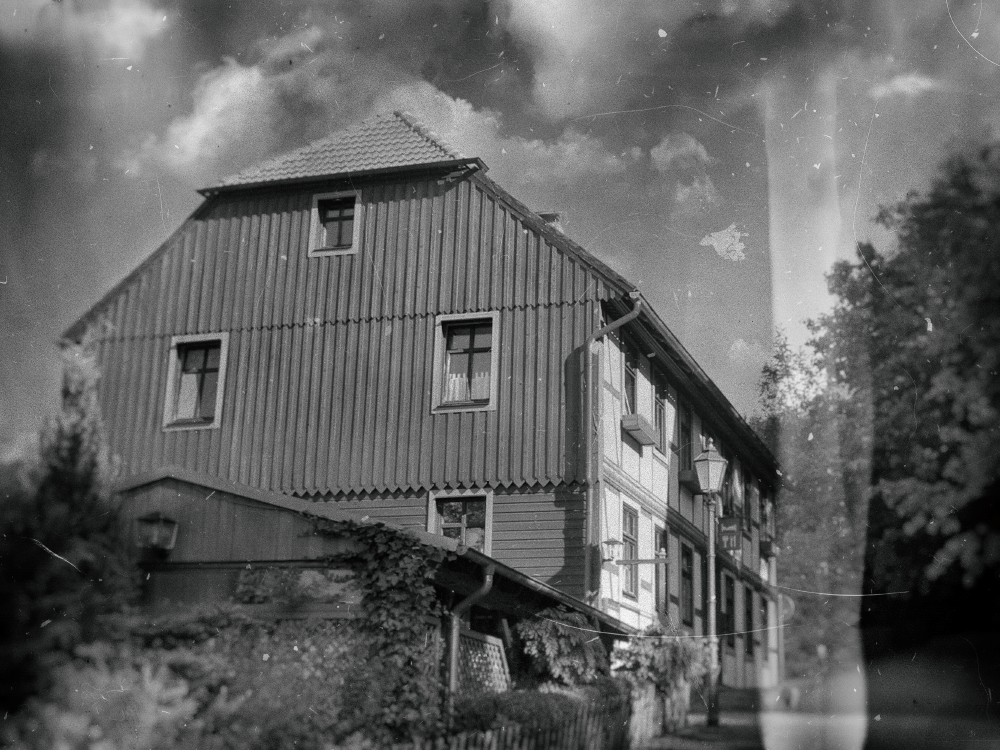 The path that leads past the house today once served as a footpath up to the castle and was bordered by a gate at the level of the building until 1945, behind which the zoo of the castle was located. It was strictly ordered to close the pedestrian gate at 10 p.m. and open it at 5 a.m. in summer and 6 a.m. in winter.

The house was first mentioned in a document in 1799 as the “valet´s house”, as the aforementioned gate was open through the fault of a valet named Rieke. A piece of game sprang up, but could be caught again in the nearby city moat. The valet was threatened with deprivation of the apartment if he failed to close the gate again. As an excuse he said that he was rarely at home during the day and that his wife was always drunk. 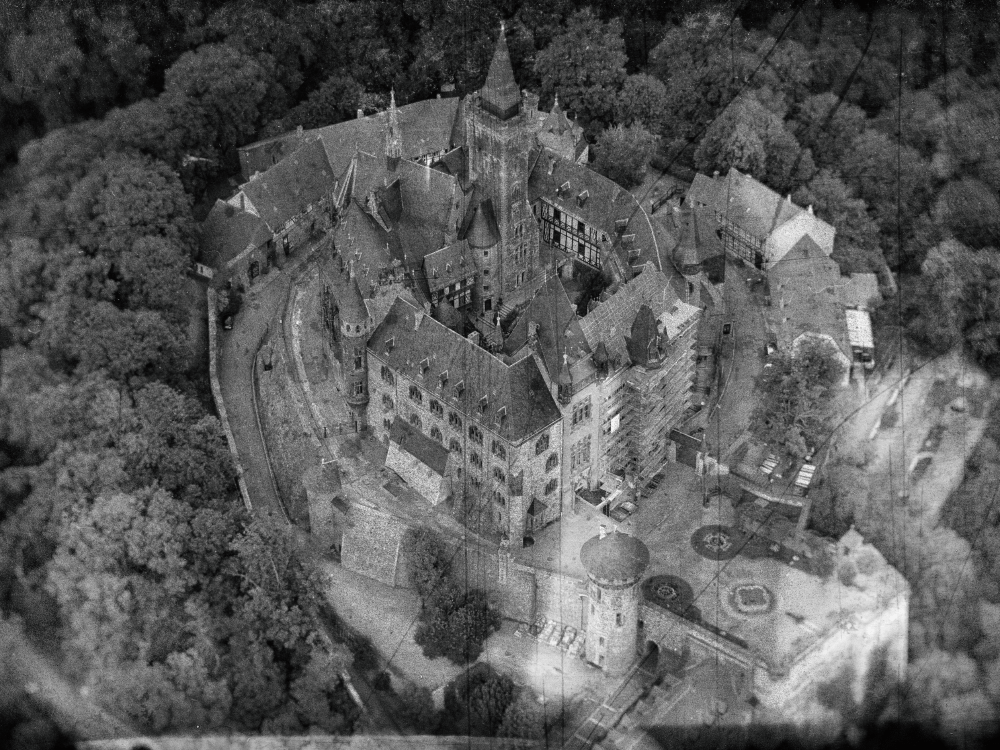 As early as the 17th century, a fountain, the “Hundeborn”, was built on the grounds of the valet´s house. It was equipped with a pump and tubes. From here the water needed was transported up to the castle by donkeys for decades. The water from the fountain also flowed directly down to the Vorwerk.

Up until 1909 only valets lived in this house. Subsequently, other employees and officials of the princely administration also lived in the house. After it became municipal property, it was used as a normal residential building. After the house was privatized in 1992, the new owner made efforts to renovate and modernize the building while preserving its monumental character. In autumn 1992 the built-up and buried cellar vault was exposed and renovated. Since 1994 the valet´s house has been used for boarding and, finally, for hotel operations. 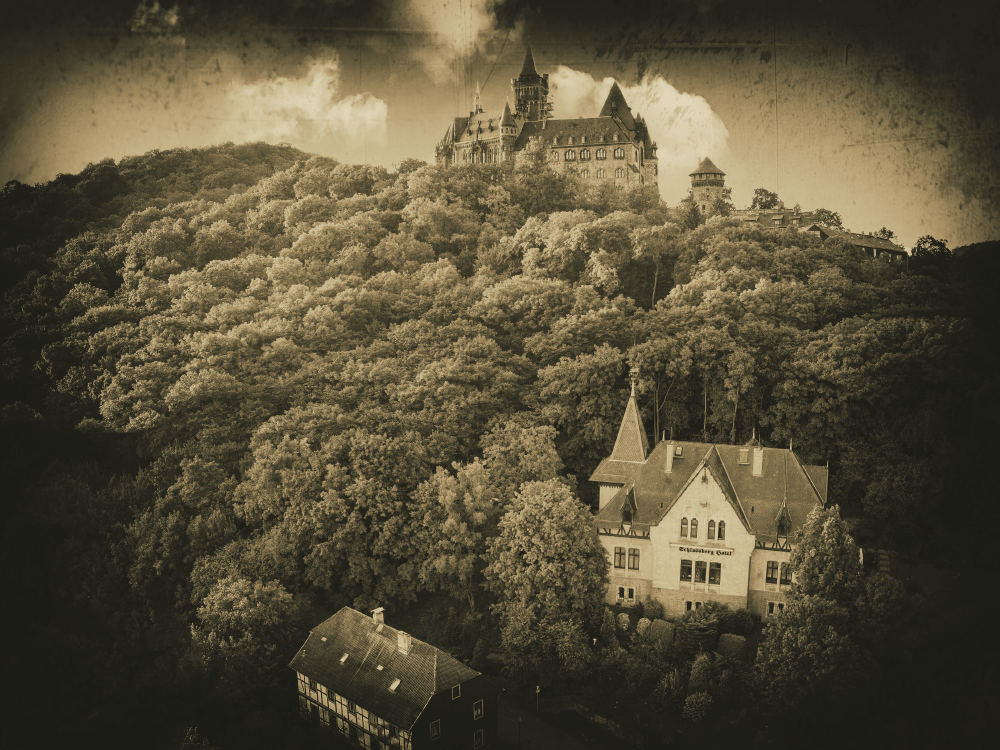